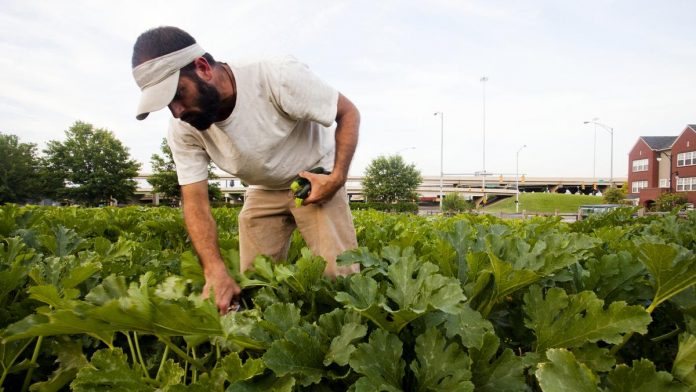 Urban farming has serious social, ecological and economic impacts in cities across the country and world. Though rural agriculture might be what most think of when they think farming as a business, urban agriculture is taking off as a viable alternative for those with limited space who want to provide food for their communities and create a worthwhile business.

What is urban farming?

Urban farming is the growing of plants and food or the raising of livestock within or around cities. Unlike farming in a rural sense, urban farming relies on nearby residents for labor and resources for irrigation and other aspects of the growing process. Agriculture in metropolises directly affects the area around it. While farms of the past were removed from the hustle and bustle of city life, urban farms are entrenched in it.

Urban agriculture can take many forms, from beekeeping to roof-top gardens. It also includes major community spaces operating as farms, orchards growing within city limits and high tunnels and greenhouses. At its core, urban agriculture brings food production into the ecosystem of cities so that residents can grow their food where they are.

Unlike rural farming, which is concentrated with large farmers, urban farming is dispersed, and farmers often operate smaller businesses in harmony with city infrastructure. The miles that food travels are condensed, making it fresher and reducing the impact on the environment. Urban farmers tend to have direct links with their consumers and have a community-minded approach to their business operations.

Urban farming benefits are extensive. From culture to the environment, urban farming makes a difference in the way people in cities live. It also has serious economic payoffs that can’t be ignored.

Urban farming builds a sense of community. The RUAF Foundation pointed out that urban agricultural projects have incorporated many disenfranchised groups, including orphaned children, recent immigrants and the elderly.

Urban agriculture also strengthens social bonds and provides ways for people to express their heritage while also connecting with their community. According to a workbook published by Vitalyst Health Foundation, farms in the city can provide a sense of shared community purpose. It said, “Working together on urban agriculture projects, people get involved in building their communities through organizing, advocacy and collective action.”

Community gardens often function as a third place for people to go other than work and home, which connects them to their city, providing a sense of pride and purpose. If done right, the communities working on urban farms will benefit from them for years to come, socially and culturally.

Many people in the United States don’t have access to inexpensive, fresh food. Food deserts, or areas that have limited access to affordable and nutritious food, are unfortunately prevalent in many cities. They affect numerous Americans, primarily those in minority populations or low-income areas where diets lack essential nutrients. Urban farms provide access to fresh food where that access might have otherwise been costly or non-existent.

Growing food locally in a community garden or organizing urban farmers to provide nutritious food to low-income neighbors at affordable prices is one way food insecurity can be addressed. It also combats the health issues food deserts cause, like obesity. Food can be grown where people need it instead of relying on larger farms or businesses to provide it to the public at higher costs.

Working in community gardens also provides exercise and time outside. In crowded cities, valuable time outdoors may be hard to come by. The physical and psychological effects of an outlet in a natural environment are another way that urban farms improve health.

In areas where poverty and hunger are prevalent, urban farming can help address these issues in two ways: providing food and creating jobs. People working and volunteering at urban farms or running their own small farming operations develop marketable skills they might not have otherwise gotten. School gardens are another fantastic way that agriculture and an understanding of where our food comes from is being taught to youth from all walks of life.

The local businesses created through urban farming also create job opportunities right in the backyards of some of the people who need them most. Agripreneurs, as agricultural entrepreneurs have been dubbed, have an increased opportunity to start their farms in urban areas because a large amount of land isn't required, and large farm equipment is not a start-up cost.

Urban farming can play a vital role in the environmental management system of a city because it is woven into the framework of the metropolis. One area where this makes a huge difference is with organic waste. Urban farming provides a way to turn organic waste into a resource. It can be repurposed into compost or food for livestock. Wastewater can also be used to irrigate farms.

Farming in urban areas beautifies the environment. The environmental impacts of transforming unused lots and filling them with plants and animals may have lasting effects when it comes to the environmental health of urban areas. In an article about the 10 benefits of urban farms, The Ecology Center stated, “Greenery adds aesthetic appeal, reduces runoff from precipitation, provides restful spaces for the community, and counters the heat island effect by fixing carbon through photosynthesis.”

Urban farming is taking place in Alabama’s metropolitan areas. In southwestern Birmingham, a seasonal high tunnel was built thanks to an NACD urban agriculture grant in 2016. The tunnel produces fresh vegetables for the community. Project Coordinator Virginia Ward seeks to educate and build awareness in the community through her work as well as provide job opportunities to young workers and healthy food to local businesses, churches and the community.

Huntsville boasts more than 20 community gardens, most of which receive assistance from the Tennessee Valley Community Garden Association (TVCGA). “The TVCGA was formed to help existing gardens leverage their assets, create power buy opportunities for gardens, help new gardens get started correctly and give new community garden leaders the tools to not only survive but thrive,” said Lee McBride, master gardener and subcommittee chair for the North Alabama Food Policy Council.

While people have different motivations for entering urban farming, there’s no doubt that it’s serious business. In the years to come, those with business experience will find opportunities in this area of agriculture, helping to make it more profitable and marketable than ever before.

Interested in influencing urban farming from a business perspective? Expand your skills with our online MBA program. With UWA, you’ll earn your degree entirely online at one of the state’s most affordable institutions.