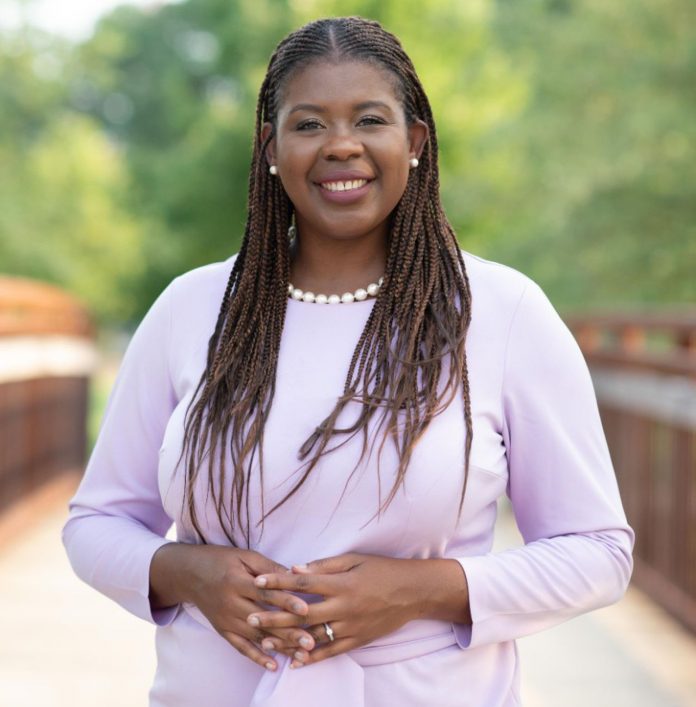 
Madison County voters made history this week by electing Violet Edwards as the first African-American woman to the County Commission.

Edwards won the Democratic primary runoff, and there is no Republican candidate in the heavily Democratic district. But she won’t take office until after the November general election. She defeated incumbent District 6 Commissioner JesHenry Malone with 1,784 votes to Malone’s 1,476. Malone was appointed to the seat in 2018 after the death of Commissioner Bob Harrison. He led voting in the three-candidate March primary, but could not best Edwards in this week’s runoff.

The 44-year-old Edwards is president of the North Alabama Coalition for the Homeless and a former executive director of Christmas Charities Year Round. She moved to Huntsville in 2002 to work as a television journalist. “She found she did not want to tell the story as much as she wanted to join the conversation and bring about change,” Edwards campaign biography says.

“I wanted to run because there are things in the community I want to see done,” Edwards said Thursday. “I know my qualifications, and I know my skill set. I felt like I could do it … so I decided to go for it. I just jumped in.”

Running during a pandemic was a challenge, she said, but the campaign changed its message to focus on keeping the district connected and informed. “We were making sure people knew where the food distributions would be or where people could go and find help,” she said. “Then we focused on people staying connected. Teaching people how to use Zoom and other free mediums out there. We would just encourage people to call somebody. Don’t just fall into yourself. Don’t fall into a depression. Let’s reach out. Use that cellphone.”

“We put money into buying masks,” she said. She handed them out “at the bus stop, at the gas station and grocery store.” People were “so excited to receive that mask, that someone was thinking of them. It was something they could use. It wasn’t a brochure or a flyer.”

Edwards wants to improve the community food garden in the district and use her marketing experience to bring more business to the Bob Harrison Wellness and Advocacy Center. She will be “diving into the budget” and “making sure it aligns with our priorities so we can actually see outcomes. We don’t have our outcomes measured, and we want to make sure we’re putting our money where we want it to go and need it to go and not to programs that are not yielding fruit.”

Edwards is proud of making history, but wants the record clear. “Some people are saying I’m the first woman. Actually I’m standing on the shoulders of Faye Dyer. She was the first woman. I am the first African-American woman, and I want to be sure I give her that respect.”