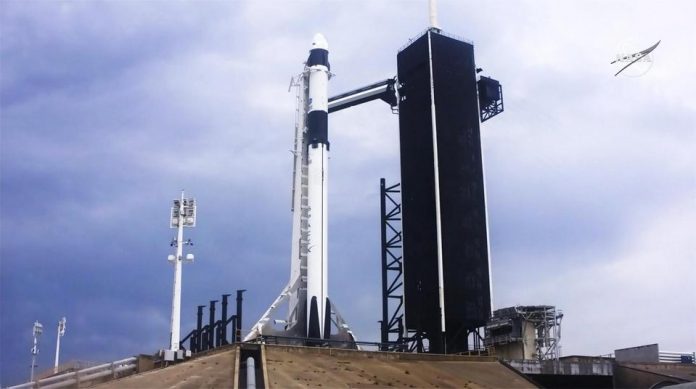 DAYTONA BEACH — This weekend’s planned launch of the SpaceX Falcon 9 rocket from Kennedy Space Center is being hailed an historic breakthrough.

It is the first private space craft to carry humans into outer space.

On Tuesday, the Volusia County Council could take a step that could help bring a bigger share of the growing commercial spaceflight industry here.

The Council will consider a proposed change to the county’s comprehensive land-use plan that would create a “Commercial Space Industry Opportunity Overlay.” It could speed building permit approvals for aerospace and aviation projects, said Clay Ervin, the county’s growth and resources management director.

“It doesn’t do away with the (approval) process, but it condenses it,” he said. “What we’ve heard loud and clear from (spaceflight suppliers) is that they need to be up and running within nine to 12 months (of deciding to locate here).”

The overlay plan would make that possible, he said.

“A fast-track permitting process could give us an advantage in competing for companies,” said Team Volusia CEO Keith Norden.

Team Volusia is a public-private partnership group that recruits companies to Volusia County. Its backers include businesses, colleges and universities, the county and Volusia County’s cities.

The county in 2018 commissioned a consulting firm to study opportunities to attract commercial spaceflight suppliers.

The Bryce Space and Technology report completed early last year confirmed that Volusia County was better off focusing on recruiting suppliers as opposed to spacecraft and rocket makers.

“NASA’s commercial cargo and crew programs will maintain steady activity at the Cape,” the report stated. “The relatively advanced phase of development of these spacecraft, however, makes it unlikely that new local facilities will be required.”

The increase in launches of small commercial satellites from Cape Canaveral is also creating a greater need for suppliers, the report found.

“We see the supply chain as our best opportunity,” said Rick Karl, the county’s director of aviation and economic resources.

The county has already had some success in attracting spaceflight suppliers.

Case in point: Embry-Riddle Aeronautical University’s announcement this past week of a new tenant at its MicaPlex business incubator on Clyde Morris Boulevard.

The company is called Printech Circuit Laboratories. It is a British maker of circuit-based components for the aerospace and motorsports industries.

The company also intends to open a manufacturing plant at a yet-to-be-determined site in Volusia County, said Norden.

“The plan is for Printech to employ 50 people over the next five years. It will be an $8 million investment,” he said.

Last year, the MicaPlex landed a research-and-development facility for another company from the United Kingdom: Arralis Technologies. The Irish company is a maker of high-frequency semiconductor chips for the aerospace and other industries.

“They are considering expanding (beyond the MicaPlex) as well,” Norden said.

Team Volusia did the initial recruiting of both Arralis and Printech to Volusia County.

“We talked to them about Volusia County and they came to visit the very next week,” he said.

The overlay plan would identify locations within the county that would be suitable for aerospace and aviation-related companies.

“The commercialization of space is not just about launching rockets,” said Karl. “It’s also about what’s in them and what they do when they are in space.”

Volusia County’s selling points to spaceflight suppliers include its close proximity to Kennedy Space Center and Cape Canaveral and easy access to Interstate 95.

The county also offers available workers and the presence of Embry-Riddle as well as Daytona Beach International Airport and several smaller airports. And it has plenty of cheap land.

Karl has been pushing to create an aerospace/aviation industrial park on 347 unused acres of county land at the south end of Daytona airport.

The proposed overlay could help to turn that south airport property into “shovel-ready” land, he said. Karl is also the Daytona Beach airport’s director.

“Some companies will say, ‘I need an existing building’ (as opposed to building one from scratch),” he said.

The inventory of available buildings has grown in recent months. A 65,000-square-foot building was vacated early this year at the DeLand Crossings industrial park off Interstate 4. A large industrial building along Fentress Boulevard in Daytona Beach also recently became available, said Kent Sharples, president of the CEO Business Alliance.

Costa Del Mar is set to add to that inventory this summer when it moves out of two buildings at Center Pointe Business Park on Mason Avenue in Daytona Beach.

The sunglass maker also scrapped plans to become the anchor tenant of a newly completed office building on the corner of Mason and Dunn avenues.

That building was supposed to become Costa’s new headquarters.

“We’ve got some move-in ready buildings that add up to more than 300,000 square feet of space,” said Sharples. “It’s one of the upsides to losing a company like Costa.”

The CEO Business Alliance is a group of business leaders who volunteer their time and money to recruit companies to Volusia.

“We are in the hunt,” said alliance member J. Hyatt Brown, chairman of Brown & Brown Insurance. “As the space industry continues to expand, we’ll have more opportunities to bring companies here.”

“We are definitely making progress,” she said. “There’s all sorts of positive indicators for Volusia County even during these challenging times because of the (coronavirus) pandemic.”

“Volusia County’s proximity to Cape Canaveral makes it a prime location for a relaunch of our space program,” he told The News-Journal in a written statement.

“Florida’s pro-business policies and safe, smart approach to reopening our economy (from the coronavirus shutdown) are very attractive for space companies looking to grow,” Waltz said.

The coronavirus pandemic could encourage SpaceX, Blue Origin and other private spaceflight companies to use more local suppliers, said Sharples.

“The pandemic has helped underscore the need for U.S. supply chain companies as opposed to relying on overseas companies,” Sharples said. “There’s a tremendous amount of opportunities for Volusia County and the overlay zones could help make a difference.”

Not everyone is keen on bringing spaceflight companies here.

Environmentalists’ objections included adverse effects the plant could have on the nearby Merritt Island National Wildlife Refuge. The refuge includes the Shiloh site where a proposal to create a private space-launch pad also sparked controversy.

Blue Origin wound up deciding to build its plant and launch pad at Cape Canaveral Air Force Base.

Similar opposition has emerged regarding the proposed comp plan change the County Council is set to consider on Tuesday.

“This corporate welfare must end, not be fast-tracked with promises of a booming new space industry built in the wetlands of Oak Hill,” said DeLeon Springs resident Jeff Brower said at the meeting.

Brower is running against Denys for the county chair position. His public comments as well as those by other area residents were included in a county staff report on the comprehensive plan change proposal.

“These are promises that cannot be kept. ... We can attract new business and increase the quality of life for current residents without these risky schemes taken for temporary political advantage,” Brower said.

Denys said the overlay plan addresses opponents’ concerns by identifying environmentally sensitive areas that should remain off limits to developers.

“This (proposed) ordinance actually clarifies that we are using the strictest environmental protection standards,” she said. “It’s a win-win for everybody.”

The south portion of Daytona Beach International Airport was one of two finalist sites for a Blue Origin rocket engine factory, Karl confirmed.

The company ultimately picked the other site.

Several spaceflight industry suppliers have already expressed interest in either relocating or expanding here. Norden considers at least a half-dozen to be serious prospects.

“Even during the pandemic, we haven’t missed a beat (recruiting companies),” he said. “We’ve already had one virtual visit (via videoconferencing technology) by an international company with another one planned.”

There is still a chance Blue Origin could establish an operation in Volusia County in the future, hinted Scott Henderson, the company’s Florida site director.

In his keynote speech at Team Volusia’s annual investors meeting in January, Henderson surprised the audience by declaring, “We’re going to launch something from this county before it’s all said and done.”

READ MORE: Volusia County aims to be in the middle of new growth for Florida’s space industry