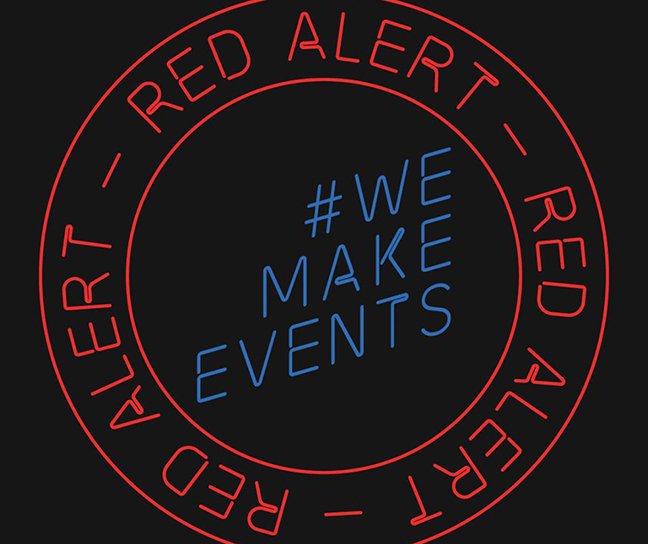 
#WeMakeEvents #RedAlertRESTART and #ExtendPUA represent a major call to action, imploring the US Congress to pass the RESTART Act (S.3814) as quickly as possible, offering economic relief to the Live Events Industry, which has been shuttered since March, 2020, putting millions of people out of work. Additionally, the movement is to support ExtendPUA.org in their efforts towards continuation and extension of the Pandemic Unemployment Act to provide relief to those without work due to COVID-19.

To call attention to the deep financial plight of the Live Event Industry, a nationwide event will take place on Thursday, August 27, 2020, from 9pm-12midnight, when as many as 1,500 buildings across North America will be lit in red. The goal to raise public awareness that the Live Events Industry is on Red Alert for its very survival, and create congressional pressure to act now. It is estimated that 96%, or as many as 12 million people in the Live Events Industry are currently unemployed, furloughed, or have lost up to 90% of their income, and the world’s largest concert promoters have reported a 98% loss of revenue since the start of the pandemic. Once a robust $35 billion industry, the Live Events business was the first to close and the last to re-open, sustaining increased financial losses in the tens of billions of dollars.

The North American event comes on the heels of the August 11 event #WeMakeEvents Red Alert Day Of Action when over 700 buildings were lit in red across the UK, calling attention to the same plight facing the Live Events Industry there.

As theatres, concert tours, festivals, opera houses, trade shows, and other live events as well as film and television production remain closed, or open on a very limited basis, the entire industry is impacted, from designers, technicians, programmers, and stagehands to rental shops, manufacturers, and distributors of entertainment technology. The first industry to close last March, Live Events could be the last sector to re-open due to the COVID-19 crisis.

“This is an important cause that, if not acted upon immediately, could result in the complete collapse of our industry and the workers who make it possible,” says Brad Nelms, director of #We Make Events North America. “The results from the UK efforts were outstanding. We’re hoping that we can generate at least double the participation to demonstrate how much impact this shutdown has had and will continue to have. PLEASE share this message far and wide, and join in by lighting your house red and posting it on social media. This is our opportunity to show the world the scale of what it really takes to make events possible.”

For information about joining the event and lighting your building red, please contact: [email protected]