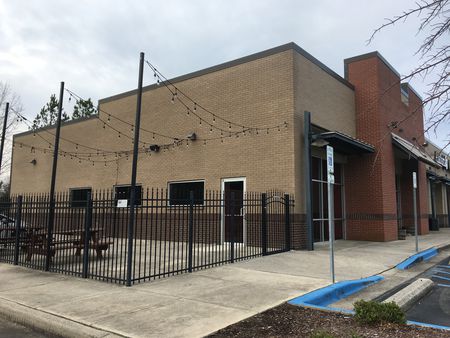 It wasn’t an April Fool’s joke. On April 1, Moe’s Original BBQ closed its first Huntsville location, on that Jones Valley-area restaurant’s 10th anniversary. “Due to the road closure of Cecil Ashburn, we have had to make some really tough business decisions,” read a Moe’s announcement at the time.

Now, with Cecil Ashburn Drive back in play, locally-owned sports bar The End Zone will open its second location, at that former Moe’s space. “We consider it a five-star location in Huntsville,” says End Zone co-owner Danny Lowe. “It’s a hub for Hampton Cove and the Southside. We decided to give it go because we felt we could be successful at that location.”

End Zone plans to begin hiring mid-February for its new digs, with the hope of opening around St. Patrick’s Day. The address is 2080 Cecil Ashburn Drive Ste. 109, in the Jones Valley Station commercial development, where other tenants include Alabama Outdoors and Anaheim Chili.

End Zone’s top-sellers include chicken wing, pizza and draft beer, Lowe says. He and business partner Eddie Bordelon plan unveil a new food menu in March. The 1851 University Drive End Zone is a go-to haunt for local service industry workers and musicians. The spot is also sometimes referred to as The EZ. “We know End Zone is kind of a lame name,” Lowe says with a chuckle.

Lowe and Bordelon have owned The End Zone for 10 years. Previously that University building was home to German restaurant Schnitzel Ranch and chicken-wing eateries Beauregard’s and Bob Baumhower’s. Huntsville general contractor Summit Structures handled the University Drive remodeling for The EZ and will be doing the same for Cecil Ashburn, which boasts a mountainside view and patio. While there won’t be a pool table like University, The EZ Southside will feature darts, Golden Tee arcade golf and pinball.

Lowe says Moe’s former Cecil Ashburn space will be completely overhauled for The EZ. However, the concept will be identical to University Drive, where hours expand Saturdays and Sundays during football season. Like University, the new EZ location will welcome smokers, Lowe says. “We will have 15-foot high ceilings, with an 18 foot fan to help with circulation. We found this has worked very well at the University location – we are not your typical Huntsville, stinky, smoky bar.” Lowe adds The EZ is also “very welcoming to the non-smoking crowd.”

Two years ago, The End Zone moved from its previous location, across Memorial Parkway at 1909 University Drive, which original opened around 1981, Lowe says. Following Cecil Ashburn, plans are to open a third location in a couple years or so, possibly in Madison.

Lowe and Bordelon grew up together in El Paso, Texas and moved to Alabama in November 1990. Their first job here was actually in The EZ’s current University Drive building, where they worked as waiters at Baumhower’s. Both men recently turned 50. They’ve now been in the service industry for more than 30 years, including Bordelon’s 15-year stint bartending at the old Finnegan’s Pub, Lowe says. “He knows and loves the Southside folk.” More info at the-end-zone.com.