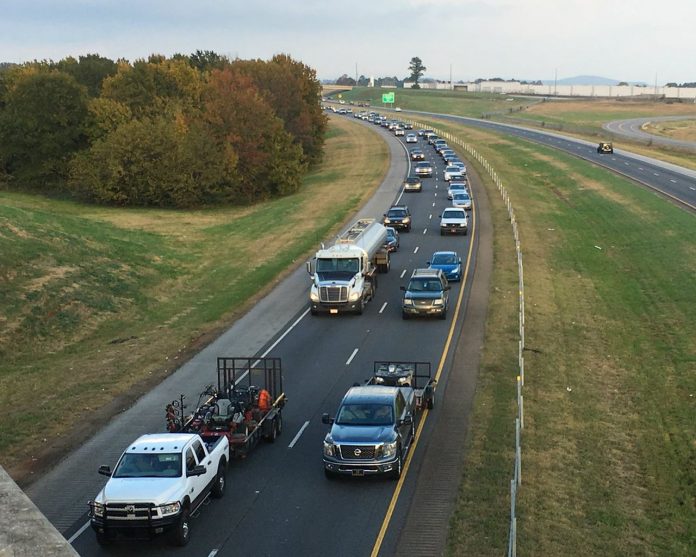 
The building of additional lanes on Interstate 565 west of Huntsville will begin Sunday, the Alabama Department of Transportation said.

In the Thursday announcement, ALDOT said the $14.3 million project has a target completion date of Dec. 17, 2021. The highway department has also offered up to $1.25 million in incentives to contractor Reed Construction if the project is completed 50 days early.

It’s been a much-anticipated project pushed by Huntsville Mayor Tommy Battle in recent years leading up to the announcement by Gov. Kay Ivey in April 2019 that it would come to fruition. It’s the first project to be funded by the state’s increase of the gas tax last year, dubbed the Rebuild Alabama Act.

Traffic routinely backs up coming into Huntsville in the mornings and leaving town in the evenings.

Those traffic flow issues are expected to become much worse with the opening of the Mazda Toyota Manufacturing plant some time next year. It's located off I-565 at the Greenbrier exit, part of the area that will see a new lane built in each direction.

The project will take place in the Huntsville city limits in Limestone County, starting just west of County Line Road and continuing to I-65. The length of the construction zone will be a little more than 7 miles.

According to ALDOT, initial work items expected to take place during June will include nighttime (6 p.m. to 6 a.m.) work to set concrete barriers and shift traffic lanes on the eastbound roadway. This will be followed by daytime work to widen the eastbound roadway, primarily in the area of Exit 2 (Mooresville Road). Two travel lanes will remain open in each direction during widening.

ALDOT is asking drivers to observe reduced speed limits and be aware of lane shifts and road crews.