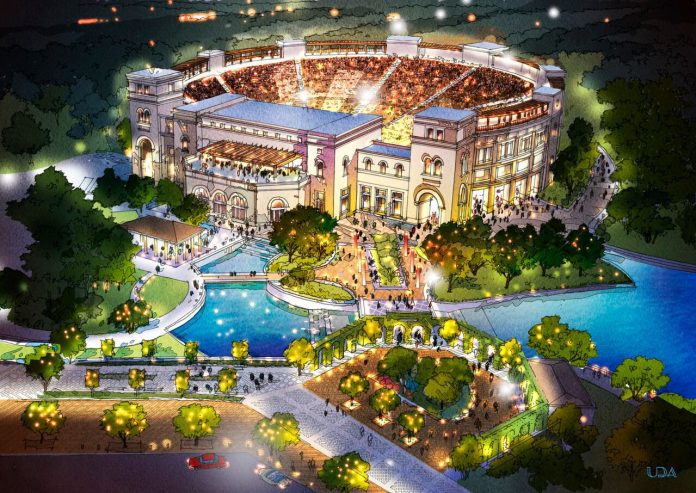 
There’s a better than decent chance the pandemic will shutdown concerts in the U.S. until 2021. Possibly longer. The concert industry’s very future and the U.S. economy itself are in peril.

This is the lens Huntsville officials now look through, when considering the city’s plans to build a world-class amphitheater here.

Construction on the amphitheater has been scheduled to begin this year, at the MidCity development on the former Madison Square Mall grounds on University Drive. The first concerts to take place fall 2021. And first full season in 2022.

But given coronavirus’ razing affect on nearly every facet of life, what does that mean for Huntsville’s willingness to fund an amphitheater estimated to cost $35 million or more?

“While they are important procedural actions,” Huntsville City Administrator John Hamilton says, “they do not commit any additional funds, nor change any commitments on when or whether or not to commence construction.” Asked if he’s aware of any plans to introduce a resolution Thursday to cut city funding for the amphitheater, Hamilton tells AL.com, “I’m not aware of any such resolutions.”

He says he’s also not aware of any discussions among city leaders to kill the project due to pandemic economic concerns. “But we are actively working to ensure the timelines allow us opportunities to make informed decisions about actual costs and when to proceed after we fully understand the financial impact of the on-going COVID crisis.” He adds the city “will not recommend moving forward on commitments to actually construct the facility until we have much better clarity on the financial impacts of the pandemic in Huntsville.”

Hamilton emphasizes the 8,000-ish capacity amphitheater is a long-term project. He also says running the project through Public Building Authority provides additional flexibility in how the city contracts for construction. However, that doesn’t change the city’s role in approving, overseeing and funding the project. “The PBA is not able to take those critical actions without city council approval,” Hamilton says.

"At the same time," Battle says, "we will examine the COVID-19 impact on the City of Huntsville finances? If we need to adapt and adjust, we’re prepared to do so."

Public Building Authority has the ability to determine bottom line cost, Battle says. The amphitheater is expected to be funded in an approximate 50/50 split between the city’s current revenues and debt. In March, Battle vetoed a lodging tax increase to help fund the project.

Ryan Murphy is president of Huntsville Venue Group, which they city contracted to design, build and operate the planned Huntsville amphitheater. Murphy, who previously helped transform Florida’s St. Augustine Amphitheater into a small market venue stars like Robert Plant are psyched to perform at, moved his family here last year, so he could be HVG’s constant presence here.

During the pandemic, Murphy and HVG have stayed in regular contact with city staff regarding the amphitheater project, which is deep into the design phase. Most of the communication has been with Battle's office and Hamilton, although Murphy's also had conversations with council members regarding community initiative ideas for the facility.

A central part of the plan has been for the amphitheater to be more than, as Murphy puts it, "just a building that hosts concerts a couple dozen times a year." Think local festivals, artist and farmers markets, graduation ceremonies, nonprofit organization events, etc. "What we are building is more of a community resource and should be seen as such," Murphy says. "Other facilities like this around the country are remaining dark because they don't know what to do when there isn't a concert happening."

And he believes Huntsville could emerge from coronavirus better positioned as a concert market. “While some of the ‘major markets’ are being hit in a way that they can’t come back from, Huntsville has the opportunity and the tenacity to remain resilient,” Murphy says.

During the pandemic, Venue Group and its team of architects and consultants have conducted Huntsville amphitheater related business via online Zoom meetings and conference calls, methods they use under regular conditions too. "All things considered, it was timed well for our workflow, at least from that perspective," Murphy says. "And honestly, with the amount of other projects that were being worked on by some of the team that got put on pause, the amphitheater has gotten to garner that much more focus and fine tuning. Which is great."

The pandemic has live music industry leaders trying to decipher what post-coronavirus concert experiences will even be like. Expect facilities like the planned Huntsville amphitheater to feature as many "touchless" features as possible.

Murphy believes a fall 2021 opening remains realistic. And something celebratory for Huntsville to look forward to, once we're on the other side of the pandemic. "And if we stay on track with this goal," Murphy says, "we can actually start creating job opportunities and economic momentum as we ramp up to opening the facility."

Murphy plans to attend Thursday’s council meeting, which is viewable via huntsvilleal.gov or on HSV TV (Comcast channel 16, WOW channel 42). The meeting, taking place at City Hall, address 308 Fountain Circle, can accommodate public who want to be heard, just only one speaker at a time. Contact info to do so is on the city website.

Growing up, Sarah G. Sheppard thought there wasn't anything to do in Huntsville and "couldn't wait to get out of here after high school." She's now a University of Alabama in Huntsville physics major.

She's also a big fan of live music. Sheppard typically goes to four or so concerts a year and travels out of town for all of them, mostly to Birmingham, Nashville and Atlanta. She's been stoked about Huntsville's amphitheater plans. She's loved to see acts like Ed Sheeran, James Bay and Hozier come perform there. The last concert she saw was in March, a Lumineers show in Nashville.

Concerts are something Sheppard's particularly looking forward to getting back to, after the pandemic. "My friends and I always turn them into a big event and will go out to dinner before going to the venue," Sheppard says. "I like being able to see how excited musicians are to be sharing their work with other people, and also love seeing how the musicians interact and dance around with each other. You don't get that with a studio recording."

City leaders have cited attracting businesses and keeping young professionals here as motives for building the amphitheater. Mayor Battle says even amid coronavirus, "We’re not folding up our tent on significant economic projects. The amphitheater is a key element of our plan and strategy to attract the best and brightest in industry and workforce to our city." Sheppard attended a previous council meeting regarding the amphitheater and spoke in support of the project.

A Covenant Christian Academy grad, Sheppard expects to finish up at UAH in May 2021. She says if the amphitheater comes to fruition, she'd be more likely to stay in Huntsville after graduating. "Not a lot of places can say they have an amphitheater," Sheppard says. "I have loved seeing Huntsville grow over the past few years, and this project would definitely influence my decision to stay in town."