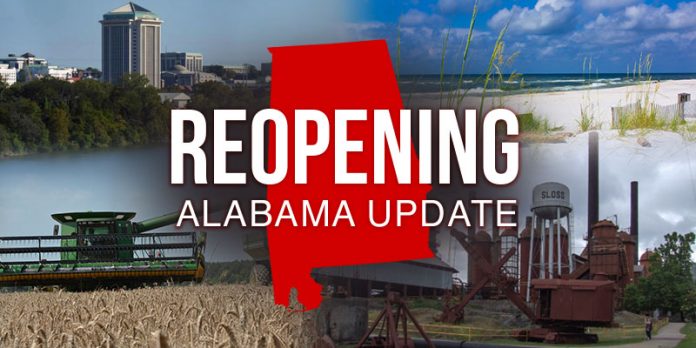 
Alabama is eight days away from the expiration of Governor Kay Ivey’s public health order.

Areas around the state are in full recovery mode. And a lingering question remains: what happens if cases increase?

Phase 2 for Madison County. Huntsville Mayor Tommy Battle has an idea of what he wants to see in the next phase of reopening. “I think phase 2 would probably include opening the retail personal contact and the restaurants,” he outlined at a Wednesday press conference.

He hopes to ease into the next phase, as he noted, “To do that, we would love to see that we start off very controlled — 25% of occupancy in the restaurants. Making sure everybody has six-foot separation. Making sure the wait staff, and the people working in the back of the house, are wearing mask and gloves. We’d like to see this open, we’d like to see this open on a very controlled amount so we can have phase 2, phase 3, phase 4 and slowly but surely move into where we need to be.”

What happens if cases increase? The seven-day average for reported cases is up in Alabama. However, these would be cases contracted prior to reopening. In his comments on Wednesday, Battle pointed out that the measurements for success will be taken 10 to 14 days after reopening.

This is in accordance with the thoughts of Dr. Pam Hudson, CEO of Crestwood Medical Center, who remarked earlier in the week, “The real truth though is in about 12 to 14 days if we see a resurgence. Remember, the exposure can occur, and the incubation period, the time until symptoms, is anywhere from 10 to 14 days. So this is not like having a daily quiz where you can get a grade every day. This is more like one exam at the end, and we’ll be monitoring and tracking that every day those, the hospitalizations, that’s really the people who are seriously ill with this virus, and that’s really what we’re trying to control our risk for.”

During his Sunday appearance on NBC’s Meet the Press, State Health Office Scott Harris outlined the possibility of tightening restrictions back up if such a resurgence occurred under Ivey’s new public health order.

“These aren’t steps forward that are just going to ratchet forward and can never come back,” Harris announced. “These are gradual steps, and we certainly will consider dialing things back if we see an increase in cases.”

Everyone’s situation is different. That was the message from Ken Grimes, city administrator for Orange Beach, in a video posted Wednesday by Gateway Initiative. In pointing out how statewide restrictions mean different things to different areas, Grimes spoke of how the economies of Baldwin County are intertwined.

“An example is when you close down the beaches, it means the accommodations are not being booked, which means no one is going to Foley to shop, which means the retailers are not open, which means the restaurants can’t supply that, which means the grocery stores run out of product,” he said. “It’s a cycle that everybody has a different situation, but that kind of gives you some ideas of what happens in South Baldwin when things begin to ripple through a tourism economy that cannot recover.”

Recovery means getting people back enjoying the Gulf Coast and reinforcing the favorability of that brand, according to Grimes. For residents, it means getting back to normal life, getting haircuts and appreciating the simple things like sitting down in a restaurant to have a meal.

Watch the entirety of Ken Grimes’ remarks on the Gulf Coast recovery: