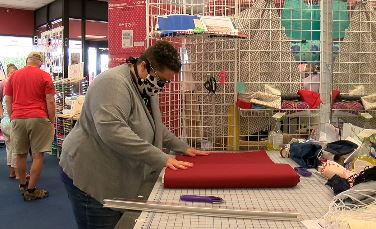 
This is the first Friday night in nearly two months that restaurants will be able to welcome diners back inside, but one former restaurant employee told us they won't be returning to the industry, even though the state is reopening.

The owner here at S and R Sewing, tells WAAY 31 business has picked up during the pandemic, with people buying more sewing supplies to make masks, which is why one woman I spoke to decided to apply for a job here.

"Not being able to help out any with the bills, the household expenses, just different stuff like that was hard," said employee, Rendi Hernandez.

Rendi Hernandez used to work at a restaurant in Huntsville.

She was laid off during the pandemic and has been out of work for two months.

"The restaurant business in itself for anyone on a normal day is very inconsistent," said Hernandez.

She started applying for jobs outside of the service industry, which has one of the highest unemployment rates right now.

"For unemployment, trying to fight for that was a nightmare and I don't want to have to depend on that," said Hernandez.

Hernandez came across a job opening at S and R Sewing. It sells sewing machines and materials.

"I was like, they have got to be doing some business," said Hernandez.

"We interviewed her and talked to her for a little bit. She seemed to fit in really good with the crowd," said owner, Tony Coelson.

The owner of the store says people have been coming inside nonstop to get supplies to make masks.

"To say we've been busy is an understatement," said Coelson.

Hernandez got the job and says she's thankful to be on a new career path.

"You know what, if we did go under a second lockdown, I still have a paycheck at the end," said Hernandez.

The owner says they are hiring for six positions and are willing to interview those who have been out of a job for the last couple of months.