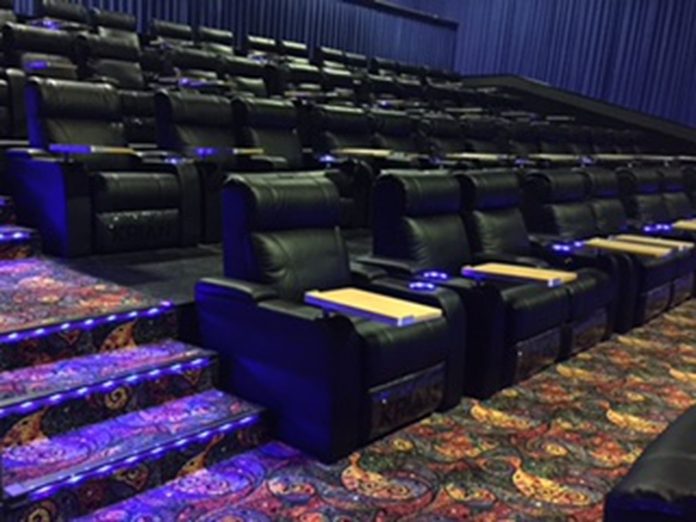 
Renting out an entire movie theater for just you and your entourage used to be a celeb move. Now, almost anyone can afford to do this. At least in Huntsville.

For just a hundred bucks, you can rent one of Touchstar Cinemas Madison Square 12's theaters for a private showing. Capacity for rental showings are limited to 20 people. Most of the rentals take place in one of Touchstar's smaller, 50-seat theaters, which still allow for pandemic-necessitated social distancing of six feet or more.

Located at 5905 University Drive N.W., Touchstar's rental options on a recent week include classics like "Jurassic Park," "Ghostbusters," "Jaws," "Goonies" and "Harry Potter & The Sorcerer's Stone." New releases, like the 2020 "Invisible Man" remake, animated hit "Trolls World Tour" and critically lauded horror flick "The Rental" are also available as private rentals, for $125. Those prices do not include tax.

Touchstar Madison Square began offering $100 rentals in June, says owner Karishma Dattani. "We thought it was a terrific way for our guests to watch a movie safely with people they feel comfortable with," Dattani says. "Maybe just family, maybe some friends, where they're socially distanced and not concerned about other people who may not be as careful as them possibly contracting the (corona)virus, whatever the situation is."

So far, the best selling rentals at Touchstar include “Trolls,” “Jumanji: The Next Level,” “Sonic the Hedgehog” and “Ghostbusters.” Most of the rentals have been for groups of 15 to 20, but there have also been rentals for as few as five people, Dattani says.

The multiplex is allocating four of its 12 theater/auditoriums for rentals. Those can be scheduled 7 p.m. weekdays and 12:30, 3:30 and 7 p.m. weekends. Dattani says she usually only knows for sure what movies they’ll have a week in advance, although with a decrease in releases due to the pandemic, many roll over week to week. Now-showing titles can be found on the theater’s website. Guests who rent a theater more than a week ahead, for say an upcoming birthday party, can pick a movie from what’s available once that week’s lineup’s confirmed. Most transactions are handled via emailed credit card forms, Dattani says.

Each Touchstar Madison Square auditorium is cleaned after every showing, whether it's a rental or regularly schedule public showing. "So once employees do the regular pick up the popcorn and drinks, "Dattani says, "and wipe down all our seats and tray tables with sanitizing solution and mop the areas that are needed, then we have a fogging machine that goes through and super-sanitizes everything, so that it's really safe for the guests."

Dattani says sanitizing foggers are also in cleaning the theater's bathrooms too. Each day, there's also an employee assigned to cleaning throughout hours of operation.

Touchstar's 50-seat auditoriums feature 30-foot wide screens. For larger rental groups, one of the business' larger theaters, 70- to 100-seats with 40-foot screens, can be arranged. (For groups over 20, the price goes up $5 each person more than 20.) Like many contemporary theaters, Touchstar's seats are now plush recliners instead of the ballpark-style derriere-flatteners of yesteryear. All 12 theaters are equipped with state of the art Dolby Digital Surround Sound and digital projection, Dattani says.

For rental pricing perspective, during normal times, Touchstar's ticket prices are $8.75 for adults and $5 for children, seniors, military or matinees.

As far as food and drinks go, concessions are open for rentals, a la carte, or group packages, say pizza and a soda for each guest, with kitchen-item orders delivered to guests at their seats.

A clever plot twist can make a movie unforgettable. But coronavirus is a twist moviegoers and particularly movie theaters could've done without. Like many other businesses dependent on getting people through their doors, the movie business is on its heels. Some theaters like Touchstar Madison Square are becoming increasingly malleable to stay alive.

Updates there include Plexiglass separating concession staff from customers, limited number of guests admitted into the lobby at any time and socially-distanced indicating stickers on the floor. Temperature checks. And masks. And those aforementioned cleaning precautions, worthy of iconic germophobe David Puddy, the “Seinfeld” TV character.

The theater’s ticket selling software automatically blocks off seats on either side of all regular-showing purchases. Dattani says Touchstar Madison Square’s staff currently numbers around 25. Unfortunately they’ve had to lay-off some employees due to the pandemic.

Then there’s the matter of anticipated films like “Tenet,” “Black Widow” and James Bond’s “No Time To Die,” originally set for spring or summer but now in suspended animation.

"It's unfortunate the major blockbusters keep getting postponed or getting pulled," Dattani says. "But there's been a few releases for those interested seeing something new. And we try to bring back some classics guests haven't seen on a big screen in a while."

Asked for the best new movie she’s watched recently, Dattani, who’s owned her theater since 2008, cites Steve Carell political comedy “Irresistible.” She says Touchstar Madison Square is working on building a drive-in theater in their parking lot, “as another way for our guests to come out and watch a movie on the big screen. So we’re really excited about that.”

Do you expect it to be safe for students, teachers and administrators to return to K-12 schools in the fall in your district?