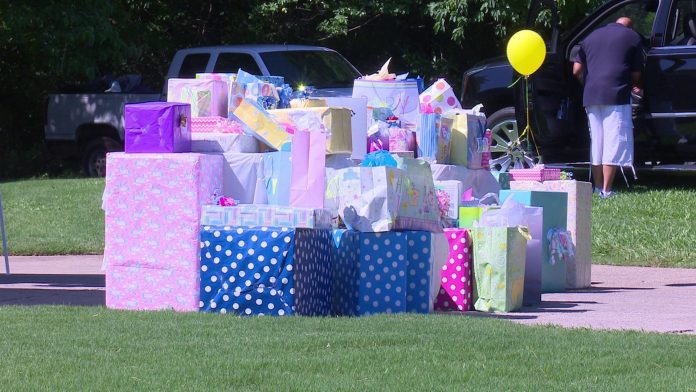 HUNTSVILLE, Ala. – A young girl takes a frown and turns it upside down. She has a good reason to smile and be proud. The playground at Williams Elementary School in Huntsville is one of Roxie White’s favorite places.

On a recent walk with her family, she saw something that made her sad.

“We were just playing,” Roxie’s dad Grant White told me, “and Roxie was really, just heartbroken to see the trash.”

The second grader suggested they pick it up. “I just said okay, let’s pick up some trash,” Grant recalls, “All the health stuff kinda went away for a moment and we said, we’ll do a little bit. We made a deal to come back tomorrow with bags and gloves.”

They did, even adding grandparents to the garbage pickup detail. “When she gets an idea,” Grant said, “she goes with it.”

Roxie was determined to clean up that little corner of her world. “I think sometimes we say no and next time but we just kinda like, we’re gonna do it,” Roxie’s mom Natalie said. When they were done, the family had collected enough litter to fill four trash bags.

When Sherita Joiner, the principal at Williams Elementary found out what Roxie and her family had done, she told me she wasn’t surprised at all. In fact, she said the school is blessed to have teachers, parents and people in the community who are great role models who show students how to be leaders.

Roxie was being shy the day we met to talk about what she saw on that first outing. But she said the area was “messy” and littered with “bottles and plastic wraps.” But her actions speak loudly for how she felt inside after cleaning up the area with help from her family, including her little brother Jaxon and sister Adalynn. Roxie felt “good.”

She opened-up a little more when she told me they’d even picked up some clothing someone had left behind. “Oh, oh yeah. There were like little shoes,” she said with a smile, “And we threw them away. They were dirty.”

You might call her, a little foot soldier for a cleaner community. When the pandemic ends and people can return to school campuses, the family told me they may just unofficially adopt the playground as a community service project.