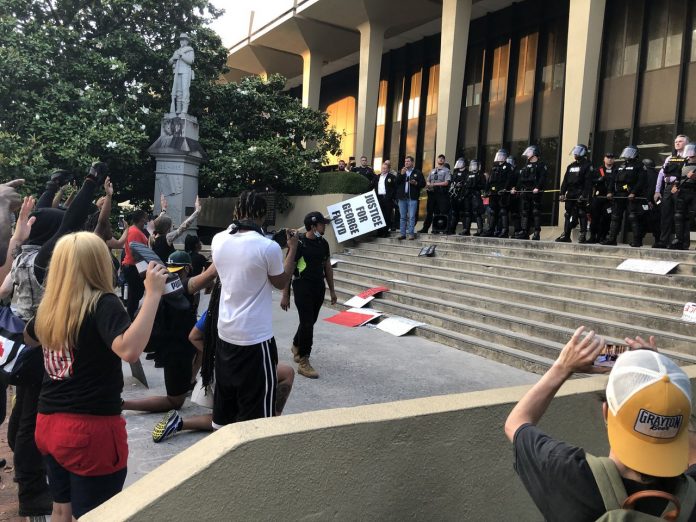 
This is an opinion column.

You had me going there for a minute, Madison County. I fell for it.

I saw the headlines — Madison County Commission votes to move Confederate monument — and I thought, “Buckle up, marble man, you’re going for a ride!”

But scratch a little further, and you’ll see the whole thing’s a sham. What the commission pulled was a silly, shifty, stupid bit of political sleight of hand. And if they fooled anybody else, a few paragraphs down, I’ll show how they pulled their little magic trick.

Like a lot of other places, Madison County has been under pressure to move its Confederate monument. Every one of these things is a signpost in their communities saying “Black Lives Don’t Matter Here” and Huntsville’s monument isn’t any different.

Last week, downtown Huntsville was the scene of a relatively peaceful Black Lives Matter protest that ended with a brutal crackdown. The police violence was embarrassing, unnecessary and, judging by how much outside help the local authorities had on hand, deliberate.

Every other major city in the state has managed to de-escalate protests without such a show of force, but not Huntsville. In one evening, the city’s reputation for progress and modernity in Alabama got pepper-sprayed in the face along with all those people in the street.

Since then, civic groups and business leaders have looked for a way to burnish the city’s image, and most have focused on the Confederate statue by the courthouse. Downtown Huntsville, Inc. and the Committee of 100 have said it should go, as have 35 local faith leaders in a joint statement.

On Wednesday morning, the Madison County Commission ostensibly voted to move it.

In truth, the commission didn’t actually vote for any such thing. Rather, it voted to petition the Committee on Alabama Monument Protection for a waiver to move the monument.

And there’s the rub.

Under the Memorial Preservation Act — the 2017 law passed by the Alabama Legislature to protect Confederate monuments — if a monument has been in place for less than 40 years, a city, county or other public agency can ask that state committee for permission to move it.

But if a monument is older than 40 years, it can’t be moved. No exceptions under the law.

And that’s the thing: The monument outside the Madison County Courthouse has been there since 1905 — 40 years plus 75 more. Those commissioners who voted unanimously for this resolution had to know that, and that’s why this whole thing is just a show.

And if their understanding of the law was unclear, they had a county lawyer sitting right there in that meeting to clear it up for them. He didn’t say anything. None of the commissioners asked for clarification in the meeting.

In short, the resolution guarantees the monument stays where it is, shifts blame to state officials and gives the commission an excuse. We’re not the bad guys, here. We want to move it. Go take it up with those awful folks in Montgomery. They’re the problem.

The commissioners asked permission, rather than forgiveness, knowing full well they’d never get it.

If they wanted, the commissioners could move the statue somewhere more appropriate and pay a $25,000 fine to the state, just like Birmingham did. However, in their resolution Wednesday, the commissioners dug in further, saying they were for moving the monument so long as it didn’t cost any public funds.

How much someone is willing to pay for something is a fair measurement for how much they want it. The commission isn’t willing to pay anything at all.

So don’t be fooled. That monument isn’t going anywhere any time soon, and those commissioners don’t want it to. What they did Wednesday was a stalling tactic.

That resolution they passed was a monumental ruse.

Kyle Whitmire is the state political columnist for the Alabama Media Group.