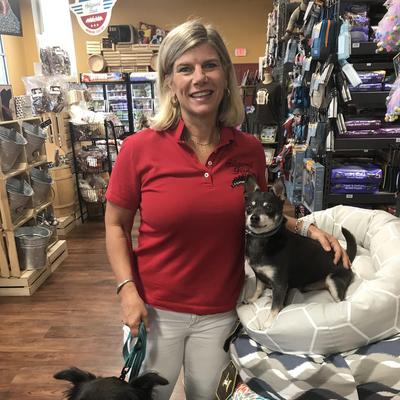 Jean McGhee said that a lot of people are feeling lonely during COVID-19. But, she isn't one of them.

She owns the Hollywood Feed stores along with her husband, Shawn — and, right now, the McGhees have all four children at home.

"My kids' schools all closed, which to them with an inconvenience but to me was clearly unprecedented," Jean McGhee said. "There's always someone who wants to eat."

So, she put them to work.

"The first part of March our internet business picked up substantially, and my children and I and my husband's CFO and his wife — we spent, I think, 12 days straight working in the e-commerce department, shipping out orders to customers to make sure they got what they wanted in the same time frame they are used to getting it from Hollywood Feed," McGhee said.

And she's got the kids helping with Hollywood Feed's same-day delivery.

"Our delivery has grown much faster than we expected. We don't give numbers, but it has definitely grown much more quickly than we anticipated," she said. "We're just trying to adapt, which is why we bought more cars and had to get them wrapped with our label and everything on them and trying to get them out to new markets as fast as we can."

Same-day delivery from Hollywood Feed stores has been in Memphis for a year and a half. They have since expanded the service to Jackson, Mississippi, and Huntsville and Birmingham, Alabama. They are working right now to get it into Little Rock and Dallas.

In addition to delivery, Hollywood Feed offers curbside delivery, and customers can still shop in the stores.

Pet stores are deemed essential during stay-at-home conditions. The McGhees found some peace of mind when they heard from other pet store owners from states under quarantine.

While the stores remain open, they have seen a decrease in foot traffic.

"We are maintaining cautiously," she said. "But, yes, we are nervous."

The McGhees bought the Memphis-based Hollywood Feed stores in 2006. There were three locations at the time. They quickly expanded into other cities. Now, there are 104 stores across the South.

McGhee said they haven't had to lay off anybody yet, though they aren't hiring. They are using existing staff to meet the demand of the delivery service.

McGhee is a pet person and cannot stand the thought of a pet being hungry or someone having to give away their pet because they can no longer take care of it.

To that end, they are working with Memphis Animal Services and its pet food pantry.

"I would encourage anyone who is not employed to take advantage of free food for their pets," she said. "It's such an emotional hardship to have lost your job, but then feel like you have to give away part of your family — I can't even imagine. We want to do whatever we can to ensure that being able to afford to feed your pet is not a concern."

After all, "There's always someone who wants to eat" extends to our furry friends, as well.

"We want to make it as easy as possible for people to get the supplies they need," McGhee said.