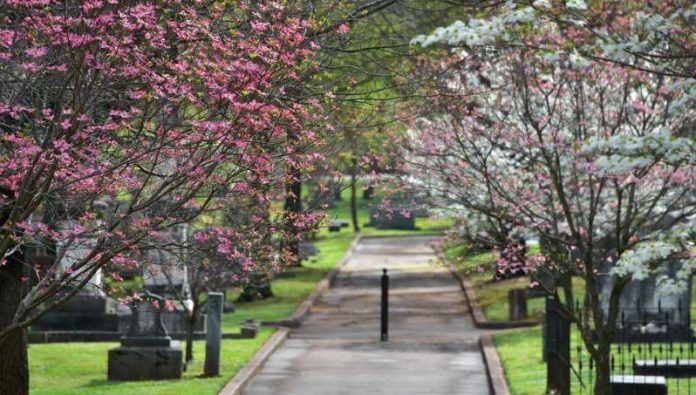 The Huntsville city council voted Thursday night to accept the Confederate monument, located downtown at the Madison County Courthouse, at a historic city-owned cemetery as an alternate site.

In a unanimous vote, the council approved a resolution to make available space for the monument at Maple Hill Cemetery – which is almost 200 years old and includes burial sites for hundreds of Confederate soldiers.

The move is part of a tedious process by which the city and the county are banding together in an tedious effort to adhere to state law and shift the monument away from a high-profile location on the downtown square that has been a target for critics for years. The issue now has unseen momentum in the aftermath of the death of George Floyd last month.

The county commission voted unanimously June 10 to seek a waiver from the review committee established in the 2017 state law that prohibits the removal or relocation of historical structures such as the Confederate monument, which was placed in 1905.

While the cities of Birmingham and Mobile removed Confederate monuments without review committee permission and paid the $25,000 fine stipulated in the law, the county commission has opted to remove the monument through the legal pathway provided.

The office of attorney general Steve Marshall told AL.com earlier this month that the law does not allow removals of monuments that have been in place 40 or more years. The statement concerned the letter of the law and was not directed at the Madison County monument.

Having an alternate site available for the monument – particularly one with the history of Maple Hill – could help sway opinion in favor of relocating the Madison County monument, according to councilman Bill Kling.

Kling sponsored the resolution approved by the council.

"It's possible that the attorney general may see that, in compliance with state law, it is a step forward to be putting the statue in a historically-significant area by comparison to the courthouse, which is roughly about 60 years old," he said. "We'll try this and see if it works."

City officials also have a bipartisan group of state legislators working on their behalf. House Minority Leader Anthony Daniels, D-Huntsville, and Rep. Rex Reynolds, R-Huntsville, have both said they support placing the monument at Maple Hill, Kling said. The cemetery is located in Reynolds' district.

The resolution the Huntsville council approved also called on the state legislature to "pass legislation that would allow cities to be granted waivers from the 2017 Alabama Monument Law when they can show that they intend to relocate monuments to areas of historical significance."

The Huntsville council earlier this month approved a resolution in support of the county commission’s desire to remove the monument.