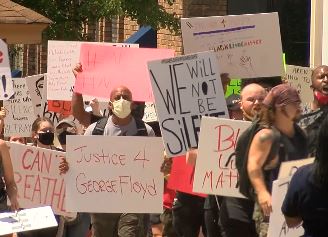 WAAY 31 is hearing from an organizer of a protest scheduled for this Thursday. The organizer says he is trying to make sure everything stays peaceful after a protest ended with teargas and dozens of arrests.

The protest is scheduled to happen outside of Huntsville City Hall, and the organizer tells WAAY 31 he will be keeping an eye on the crowd to make sure people are following city ordinances.

"For them to acknowledge our demands and tell us what you're doing to see that those demands are met," said co-organizer, Damar Thomas.

Damar Thomas is helping organize this Thursday's protest. He says he wants the city and police department to make some changes.

"The police should be more transparent, be it through their hiring process," said Thomas.

Thomas and another organizer, Brendan Lewis put together a list of goals they want, including more training on the use of force policies and releasing standard procedures to the public.

'If there are procedures that say when such and such happens, then this force is justified, then we need to see those," said Thomas.

Thomas says he is advertising the protest on social media as peaceful and hopes it goes smoothly like last Friday's protest in downtown Huntsville.

"It was a very organized, very peaceful protest. We made sure the streets were not blocked and people stayed on the sidewalks and we made sure people were very respectful," said Thomas.

The protest begins at 5 p.m. on Thursday and protesters are asked to wear a mask and dress in black.