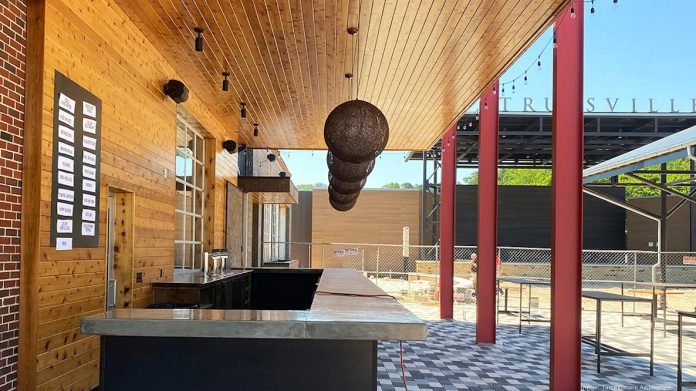 Architect Turnerbatson and project contractors are putting final touches on the area, and are aiming to late summer for completion. Contractors are slated to complete main intersection work in August, and landscaping will wrap up in the weeks after that.

The pocket park on the northwest corner of Highway 11 and Chalkville Road is scheduled to be complete later this fall.

The new district will include a 27-foot stage that will be used for concerts, sporting events and community movie nights. Roughly 2,500 people can be in attendance. According to the Trussville Tribune, the district will have bike racks, new parking lots, a green space, benches, unique streetscapes and sidewalks.

Finishing touches will coincide with the opening of new businesses for the district.

Cookie Dough Magic, which started its first shop in Avondale in 2018 and is expanding to Huntsville, plans to open a location on Beech Street later this summer or in early fall. It will offer music at night and a trendy atmosphere to fit in with the vibe of the district. The shop is in the same building as Ferus Artisan Ales, which opened in 2019. Sip Social is also coming to the district this year from the creators of Magic City Nutrition. They are looking at opening multiple locations in the metro in the coming years.