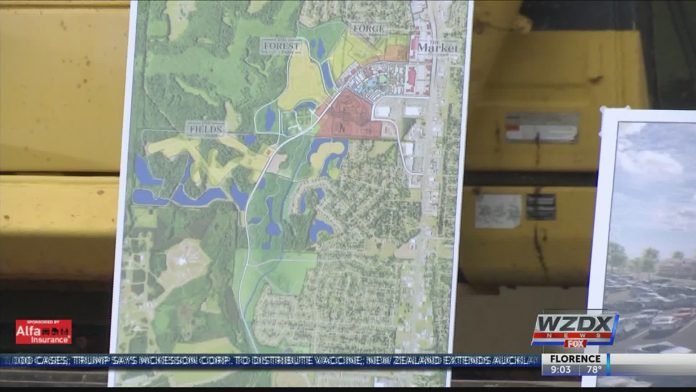 Local leaders met Friday morning to kick off construction of the new "Market at Hayes Farm". They say it’s going to change a lot of of things in the area...

HUNTSVILLE, Ala. — Local leaders met Friday morning to kick off construction of the new "Market at Hayes Farm". They say it’s going to change a lot of of things in the area-- even the property value of your house. But, is this change good for everyone?

We asked Huntsville Mayor Tommy Battle what locals can expect.

The South Huntsville shopping center near Memorial Parkway and Weatherly Road has had its doors closed for quite some time. But, now it’s going to be the site of the new "Market at Hayes Farm".

Richard Lee, the Executive Vice President of development company, Branch Properties, says, “Most of these buildings you see beside us, in about two weeks will be demolished.”

We’re told, the demolition will make room for About 110,000 square feet of shops, restaurants and business spaces.

The only store remaining in the complex? Staples; though it will be getting a makeover with a brand new exterior.

A Publix store in the shopping center will spearhead the project.

Representatives from Branch Properties of Atlanta say Huntsville has been on their radar for new projects. Richard Lee tells our reporter, “It’s incredibly favorable demographics, education levels and really just the dynamic nature of Huntsville.”

John Hays of the Hays Family, the driving force behind this project, says it will bring change to your bottom line. He says during the media conference, “The dream is now a reality. I’m think you’ll see your home prices reflect that as of 10:00 this morning...”

Audience members proceed to laugh.But, we’re told this is actually true. We asked Mayor Battle about how the change in property value will affect locals. Battle says, “People who own a house down here, their value just went up. But, people who will be moving in here will still be coming in at the very bottom tier of the next generation of housing in this area.”

We’re not sure how this will affect renters in the area.

Mayor Battle says there are a number of new things coming to South Huntsville. He adds, “This is the retail element up front. There’s more retail, there’s more offices, there’s a park in there. Walking trails, greenways throughout. When you get finished with it, it’s a development that the whole city of Huntsville will be proud of.”

And with it, he says, job opportunities will come. Mayor Battle says, “It used to be, we had all high-tech jobs. Everybody was an engineer. Everybody was a rocket scientist. Today we have jobs across the board.”

The Publix store is expected to open its doors in Fall of 2021.