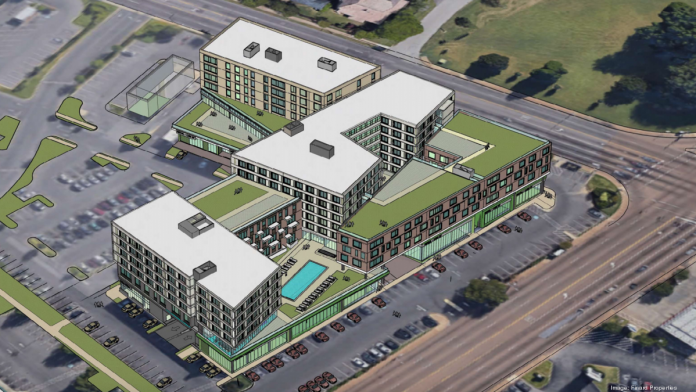 When Spin Street left Poplar Plaza in 2017, Rick Smith thought he had an opportunity to renovate the building.

The Finard Properties director of property management thought a major reinvestment could attract top-end tenants. But, the tenants didn't come, so the renovation never happened.

In 2018, Smith and Finard Properties started looking into gutting the old building and transforming it into an apartment building. But, they soon realized the old building couldn't contain enough units to make the project feasible.

So, they began looking at cities across the region — St. Louis, Huntsville, Little Rock, and others — to see how retail spaces had been transformed into multifamily properties. What they came up with was the plan partially released on July 7, which includes the demolition of the two buildings at the corner of Poplar Avenue and Highland Street.

Smith revealed Friday, Aug. 14, that the hope is to eventually include 240 apartment units on the property and rent them out for about $1,500 per unit. These would be built in two phases. The first would replace the larger, Poplar-facing building, and the second would replace the Highland-facing one.

Finard is seeking a payment-in-lieu-of-taxes (PILOT) incentive that would last 15 years and be worth $14.7 million. The project would cost about $56 million, according to the PILOT application with the Economic Development Growth Engine (EDGE) for Memphis & Shelby County.

Smith is hoping to get the first phase underway relatively soon.

"If all of the moons line up — and that doesn’t happen a lot — I think there would be potential for this to start next summer," Smith said.

Before demolition starts, Finard has to come to relocation agreements with the tenants in the building. While the old structure included about 45,000 square feet of retail, the new one will include 27,000.

Smith's hope is that the second phase will begin before the first is completed. But, he said it's nice to have the option of delaying the second phase, in case pre-leasing of the first doesn't go as well as expected.

The project is a unique one for Finard. The Boston-based firm has vast experience with retail, office, and hospitality properties, but residential is a new beast. To take it on, Finard is partnering with another Boston-area firm, Panther Residential.