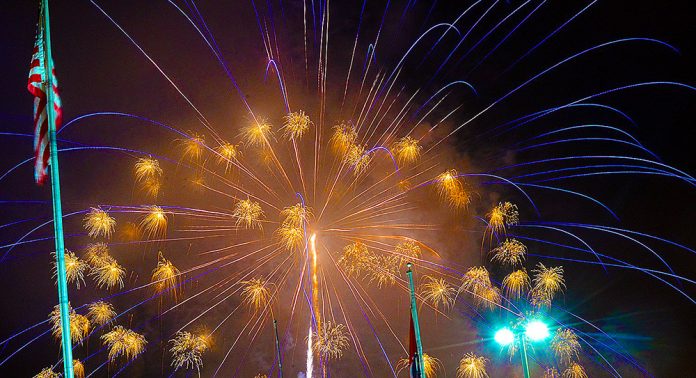 HUNTSVILLE — Thanks to the coronavirus outbreak, which continues its upheaval of normalcy as the summer season begins, Independence Day will look much different in downtown Huntsville on Saturday, July 4.

There will be fireworks at dusk, and there will be the traditional New River Run to start the day, but there won’t be much else in between. Most of the day’s festivities are being canceled.

“There won’t be any entertainment or a lot of stuff on the mall,” Huntsville Mayor Dennis Jeffers said Wednesday afternoon. “We just can’t put that many people down there on the mall.”

Among the festivities that will be canceled will be the traditional Independence Day parade, which usually begins at 11 a.m. on the morning of July 4. This year was to have seen the Scott County Chamber of Commerce present the parade for the first time, but coronavirus has changed things. The Chamber of Commerce Tourism & Events Committee on Wednesday determined it was not feasible to move forward with parade plans.

Jeffers said an idea that had been discussed was moving the parade to 8 p.m., just before the start of the fireworks display, and altering its route. But there’s still too much uncertainty. As of now, Tennessee Gov. Bill Lee’s executive orders specifically mention both festivals and parades as off-limits.

While there will be the early-morning 5k, the traditional pancake breakfast to begin the day will not happen.

“Most of the folks who utilized the pancake breakfast were the vendors,” Jeffers said. “They’d come, have breakfast, and then start setting up.”

While most of the vendors who might otherwise set up on the mall for the two-day festival won’t be on site, the town will allow a limited number of food vendors to set up.

“There will be some folks around during the day looking for something to eat,” Jeffers said. “If they know there’s food there, some will show up.”

One thing that is certain, besides the New River Run and the limited food vendors: Huntsville’s firefighters will light up the sky at dusk, no matter the governor’s executive orders that ban festivals and parades.

The coronavirus pandemic has thrown a wrench into everyone’s traditional summer plans. Jeffers and the Town of Huntsville had previously determined that the town’s swimming pool would not open for the summer season. Most other municipal swimming pools across the region will be closed this summer, as well. While Jeffers and the town caught some flack over the decision, and petitions circulated calling for the pool to remain open, the mayor said it simply wasn’t feasible to reopen the pool.

The Huntsville City Park also remains closed. Gov. Lee’s executive orders prevent playgrounds from being open to the public. However, Mayor Jeffers said Wednesday that he’d like to see the park reopen — perhaps as soon as early June — with the playground off-limits and the rest of the facilities open.

Big South Fork National River & Recreation Area Supt. Niki Nicholas said Wednesday that a decision has not been made on whether the Bandy Creek swimming pool will open this summer. The pool is typically open on weekends and holidays from Memorial Day to Labor Day. But Bandy Creek Campground remains closed for now. There has also been no decision on when to reopen the campground, though Nicholas said she anticipates an announcement to be soon forthcoming.