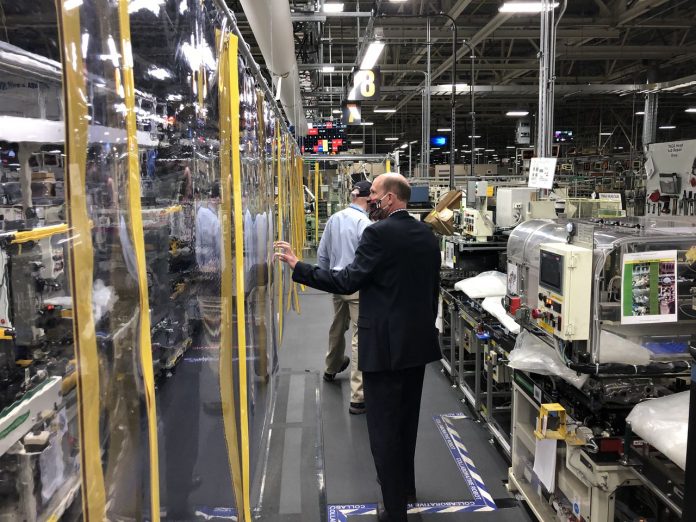 
Toyota Motor Manufacturing in Huntsville will welcome about 1,400 employees back to work on May 11 in a setting dramatically different than what they left in March.

The sprawling plant, which produces about 630,000 engines a year, has been shut down since March 19 while the company reimagined manufacturing in the COVID-19 era.

"The challenge is we're having to break everyone's habits," said David Finch, president of Toyota Motor Manufacturing Alabama. "We've been very deliberate in the way that we've set up to force people, in a nice way, to follow the rules and to start breaking the habits."

Toyota officials opened the plant earlier this week for Huntsville Mayor Tommy Battle and Madison Mayor Paul Finley to see first-hand the new coronavirus precautions that have been put in place. What they saw were markers on the floor throughout the plant placed six feet apart, a reconfigured dining room now at a fraction of capacity, plexiglass virtually everywhere and clear vinyl curtains to separate employees working in close proximity on assembly lines.

For a manufacturing facility designed to run as efficiently as possible with hundreds of employees in a business demanding hundreds of thousands of engines each year, the pandemic has forced the company to conceive of new ways of doing basically everything.

So when employees return to work, it will almost be like the first day of school.

It will begin before even entering the building. Tents have been set up outside the plant entrances for employees to line up for temperature checks before each shift. The queues, of course, are marked off six feet at a time to maintain social distancing.

Inside the plant, informal team meetings that typically took place in paths amid the assembly lines are now carefully orchestrated events with spots marked on the floor where each employee should stand to make sure each are at least six feet away from each other.

Capacity in the dining room has essentially been cut in half with designated places to sit and marked places not to sit. Employees eating at the same table will now be separated by plexiglass and plexiglass dividers have been installed between each of a row of microwaves.

And while Toyota in Huntsville has produced 7,500 face shields for area hospitals, face shields will also be given to employees to wear during their shifts.

The changes are so different, Finch acknowledged, that you can read a description and see pictures and it still doesn't completely convey how different it is.

"It's actually very difficult to note," he said. "There's a saying, seeing is believing. You can take a picture and show a picture. But until you actually see it in real life, it's very difficult."

These changes, of course, are not unique to Toyota.

"This isn't just manufacturing," Battle said. "This will carry over to the retail industry and the restaurant industry and the hospitality industry. All of the things that they have thought about here are universal."

"What they have done proactively should minimize any spike," he said.

The finished coronavirus-era product went through several versions before officials were satisfied, Finch said. It's a process integral at Toyota known as kaizen – a Japanese word for continuous improvement.

“Having worked with my team here and seen what the kaizen team have done in a short space of time, they’re very clever people,” Finch said. “They have that mind to make kaizens, to adapt things. They are fully in tune with that type of thing. I was confident whatever challenge we put in front of them, they would come up with a solution.”