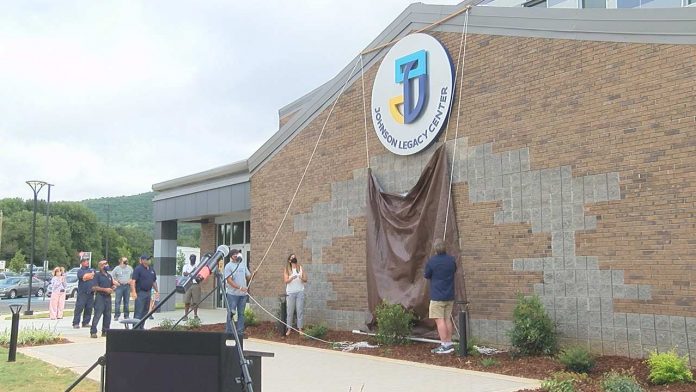 Saturday morning, the Johnson Legacy Center opened to the public for the first time and city leaders applauded the $6,000,000 project.

"That's what we've got here in Huntsville. Something that's going to drive people from all over to come to this facility. In doing that, we want to make sure that we've kept the heritage of Johnson High School. As you walk through the doors. You'll see the colors. You'll still see the memory of Mr. Johnson when you walk in but yet it's a new beginning ... Something we're proud of," said Steve Ivey, the head of parks and recreation.

The recreation center is the first of its kind with an indoor rock climbing wall, soccer and volleyball courts and a fitness room with saunas.

WAAY-31 spoke with people in the community and city leaders about what the new center means for North Huntsville.

When you come into the Johnson Legacy Center there’s touch-less ways to enter by using your own personal membership card and several hand sanitizer stations placed everywhere to promote safe and healthy guidelines.

Many people told us the center is going to be a place for memories and legacies to be made.

"This is unique because many of the individuals, though people can't graduate from Johnson High School anymore... many individuals will enjoy the amenities inside," said Devyn Keith.

The rec center is equipped with amenities like a gym, rock climbing wall and courts for volleyball and soccer.

But while inside, everyone, must wear a mask and staff clean the equipment as soon as someone is done using it.

Plus, they have contact-less ways for you to pay and sign in with just the swipe of a card.

"I'm glad they're enforcing those guidelines because from what I've seen as far as coronavirus existed, the primary thing is if everybody wears a mask, they should be okay," said Michelle Rooks.

Michelle Rooks is a Johnson High alum from the class of 1987.

She told us when she came in the newly renovated building it brought back memories that she hopes others can now feel.

And Keith says he hopes this building can be more than just a money maker...it's also important for people to make the start of something new.

"This is a moment, not about a project but about people so to say the word legacy is to show respect to the remnant that is left," he said.

The new rec center costs nearly $6,000,000 and many people say it was money well spent.

"It's beautiful. It expresses things that we had going on back in the middle and towards the end," said Rooks.

City leaders say they’ll keep the Johnson High pride going by opening the Jaguar community room in about a week.

It's meant to be a place where the community can hold events and fundraisers.

The rec center is now open for memberships and the support doesn't stop there.

The Schools Foundation will sell bricks for people to place on the front of the building and on the walkway leading up to the front doors.

The money will go towards students in the school system in North Huntsville.

They're calling it the education pathway.