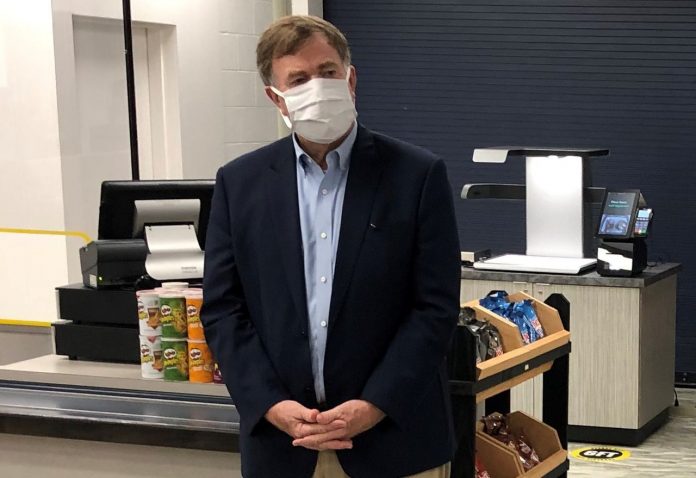 
An effort to require face masks in public is underway in Madison County while a push is soon expected from the mayors of Alabama’s largest cities to make it a statewide law.

In what appear to be parallel movements toward mandatory face coverings, the Madison County Board of Health is seeking authorization from the Alabama Department to Public Health to implement a law in the state’s third-largest county.

Meanwhile, Battle and Madison Mayor Paul Finley said they hope to see a push from the mayors of the 10 largest cities to encourage Gov. Kay Ivey to consider a statewide requirement on masks.

It’s a fluid situation, Battle said, and no new masking law is expected to be enacted until at least next week, if it happens at all.

But Battle and Finley said on Wednesday that they support the initiatives – a shift from earlier stances when they had concerns over how such a requirement would be enforced. They emphasized that mandatory masks for Madison County alone would be insufficient given the recent surge in cases in north Alabama.

“I think all of us realize that we’re in somewhat of a dire situation,” Battle said.

3-page order proposed by Madison County Board of Health for requiring masks. Ignore the effective date of July 1 at 5 pm. It’s not expected to go into effect until next week at earliest. Still needs ADPH approval and adoption process by govt entities. pic.twitter.com/CuwFdpaQdq

Places where face coverings would be required are indoor spaces of businesses or venues open to the general public – such as bars, restaurants, entertainment venues, public meeting spaces, government buildings and civic centers. Public transportation would also be included as well as outdoor areas open to the public where a 6-foot distance cannot be maintained between people.

There are numerous exemptions from the face covering requirements, such as places of worship, children under 2 years of age, eating or drinking in restaurants and at private clubs and gatherings.

The proposed order also does not spell out penalties for violations. Attorneys for the cities of Huntsville and Madison have been reviewing the proposed order to determine how it would best be enforced, should it become law.

The debate over mandatory face coverings has been an ongoing issue across the state in recent weeks. Birmingham, Montgomery and Selma have implemented ordinances requiring masks be worn in public places as well as Jefferson County. Decatur’s city council has met twice this week on the issue of masks but did not hold a vote on an ordinance.

“It would certainly be easier if it was done statewide by the governor and the health department as opposed to making every mayor make their own decision,” said David Spillers, CEO of Huntsville Hospital.

That’s the direction favored by Battle and Finley as mayors of the state’s second- and 10th-largest cities, respectively. Battle said they plan to begin reaching out to what’s become known as the Big 10 Mayors, who meet on a regular basis as the leaders of Alabama’s largest cities. Each city or county, Battle said, is not an island unto itself.

“One of the things we would rather push is something regionally or statewide on this,” Battle said. “We have (people from) 16 counties that come in to work in Huntsville every day. And they go back to their communities and their communities need to be just as safe as our communities. We need to make sure that safety is provided across the board. We have 12 or 15 counties of people who live here and go out and work in other counties every day. They go out to a county that’s not masking, there’s a chance they come back with it and bring something into our community we don’t want to see.

“One community can’t do it by itself. It’s got to be across the board.”

Said Finley, “We’re trying to figure out the easiest way to get people to wear masks.”

The opponents of face coverings will eventually adjust, Spillers said.

“I hope it goes statewide,” he said of a face covering law. “You don’t get to go into a restaurant if you don’t have on shoes. Why do you get to go into a building without a mask on? I think we can start changing people’s mindsets on that.”