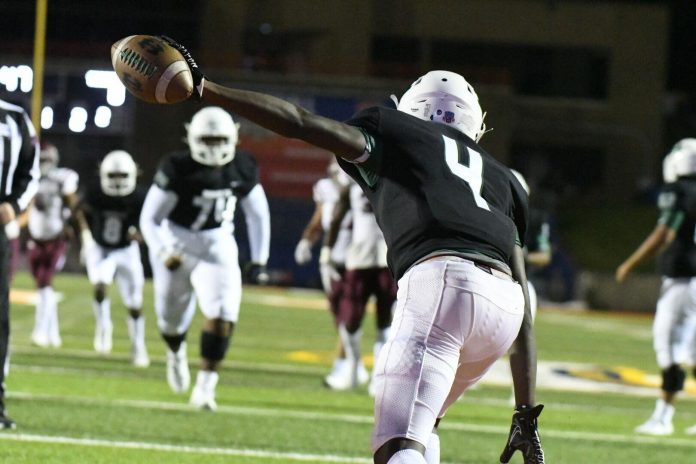 
In a top-10 showdown between undefeated Region III powers, Huntsville showed once again why it belongs among the Class 5A elites.

To say Huntsville — which didn’t make an appearance in the statewide rankings until this week, despite an undefeated start coming off a pair of playoff victories — is playing with a chip on its shoulder would be an understatement.

Riles had 5.5 sacks, seven tackles for loss and a fumble recovery to lead the Huntsville defense. Calvin Simmons and Edward and Brian Bobino also got to the quarterback, with Edward forcing two fumbles that his team recovered.

Consol's lone touchdown of the night occurred on a defensive breakdown that resulted in a 60-yard catch-and-run from Kyle Willis to Sutton Lake. The Tigers gained only 231 total yards while being held to 24.8 points below their season average.

In addition to his defensive efforts, Riles played a pivotal role offensively in short-yardage situations. Having his number called on a pair of fourth-down conversion attempts, Riles took direct snaps for a second-quarter rushing touchdown and a 20-yard run that helped seal the win in the final minutes.

"Q is a beast," said Huntsville offensive coordinator David Brewer, who served as acting head coach in Rodney Southern's absence on Friday. "Q has been like that for three years. He just gets better and doesn't get tired. ... We lost two defensive ends early in the year, so he's come in there and really picked it up, and Seth Carroll on the other side has done a good job.

"Those guys have been solid. If they keep playing defense like that and we take care of the football offensively, we have a chance to win a lot of football games."

Huntsville junior quarterback AJ Wilson began to settle in during his seventh varsity start, and connected with senior receiver Jordan Woodberry for a pair of passing scores.

"Our connection is getting really strong," Wilson said. "Teams are going to see (us attacking) a lot more one-on-ones. JoJo is good receiver ... and he's been putting it down for us catching the ball."

"We love the confidence," Woodberry added. "He's getting better everyday."

Wilson completed 8-of-12 passes for 119 yards, while also adding a fourth-quarter rushing touchdown that stretched the Hornets' lead to 20 with 6:33 remaining. Woodberry finished the night with five catches for 97 yards, while junior running back Jaylon McClain rushed for 122 yards — surpassing the century mark on the ground for the second consecutive week.

"I knew the more he played the better he'd get," Brewer said of Wilson. "He's been nervous early in the year and did some things he normally doesn't do. I think now he's settling down. He's trusting his offense line because they are getting better, and he knows he has some backs back there that can run the ball.

"He's done really well on his play-actions, and taking care of the ball and getting it to the open receivers. I'm really proud of how he grew up tonight."

Huntsville will look to continue its undefeated start next Friday on the road at Lamar Consolidated.

However, as a program that has claimed five playoff wins in the past two years, the Hornets have their sights on goals that extend well beyond the regular season.

"Like I keep saying," Riles remarked, "we are going to the state championship this year."

Through five dominant victories to start the 2020 season, they've been given little reason to think otherwise.