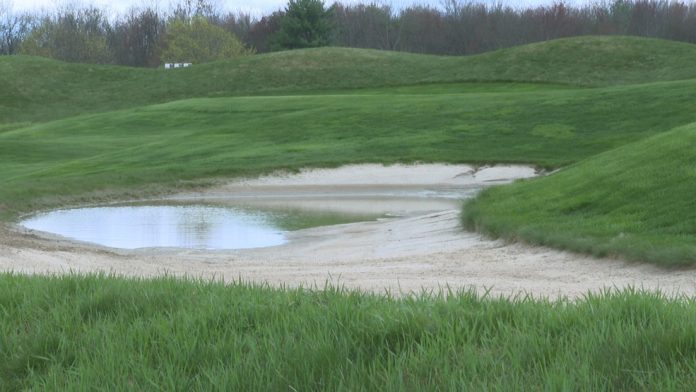 (WOLF) — People headed back to the green in Pennsylvania Friday.

It was the first day in more than a month that places like golf courses, marinas, and guided fishing tours were allowed to re-open.

For many, it felt pretty nice to get out of the house, but that doesn’t mean it was smooth sailing.

Lots of heavy rains Thursday night did leave golf courses a little muddy and some businesses scheduled to reopen Friday just couldn’t because of the conditions.

"It'll be different, but it'll good," said Matt Occhiato, the head golf professional at Huntsville Golf Club. "I mean nobody has anything else to do so let's just golf all day."

Golfers trickled in to reopening day at Hunstville Golf Club.

He and his friends were enjoying the outdoors.

"Well my wife kicked me out today," joked Dallas resident Jim Fronzoni. "So she's had enough of me"

Precautions are being taken.

The club house was closed and only essential staff was on hand.

"Plenty of room for social distancing on a beautiful course like Huntsville," said Fronzoni.

For now, the club doing tee times only.

"We can't do a lot that we've done in the past," explained Occhiato. "We would typically get people's clubs out of the car and put them on carts and clean their clubs when they're done, but we can't do that now."

There were no golf carts Friday since the rains created some muddy conditions.

"I think the walking and the fresh air helps everybody," said Lafoca.

While golfers could power through, business like Al's Susquehanna Guide Service couldn't.

"People from the city love to come up here, spend some time outdoors, catch a lot of catfish, muskies," said Allen Casal, the owner of Al's Susquehanna Guide Service.

He's been leading tours on the Susquehanna for years, but knew Friday would have some issues.

"Anytime there's 1 to 3 inches of rain in the Endless Mountains, really hard to get going," he said.

He's delaying his start date until at least Wednesday, but there's no shortage of customers.

"From the day I start, no, I don't have an opening until the end of June," explained Casal.

He's happy that even though he can't get started just yet, this is bringing a bit of normalcy back.

"Everybody stay safe out there and it'll be over before you know it," said Casal.

Even with things a bit shaken up, business is expected to kick back up to normal.

Al is working on rescheduling his April bookings and over at Huntsville the tee list is filled for the whole weekend.